Iran has been receiving much attention, including a proposal for détente, from the Europeans and the U.S. Envious of that kind of play, “Dear Leader” declared he was going ballistic!

After decades of practice, North Korea is skilled at producing statements that are sure to ruffle feathers and grab attention. To an untrained ear, these belligerent words sound like air raid sirens. But he is not suicidal. And all he wants is some T.L.C., phone calls and peace and quiet in his backyard.

There are some things the U.S. can do to overcome this largely political hurdle.
It would not be surprising if Iran has taken a chapter or two out of North Korea’s playbook on effective propaganda and war-mongering in order to raise its bargaining position.

Iranian President Mahmoud Ahmadinejad appears to have adapted North Korea’s tactics to his own needs. Instead of the overplayed “Great Satan,” he took a swipe at Israel. When the U.S. largely ignored it, Iran pressed further.

The most bizarre part about the new tactics was literally the song and dance that accompanied the celebration of its Uranium enrichment program.

The photo below shows men in traditional clothing dancing against the backdrop of doves tugging on an Iranian flag with the universal nuclear symbol. The two men are holding metal canisters of enriched Uranium (maybe). Even by North Korean standards, this seems over the top. 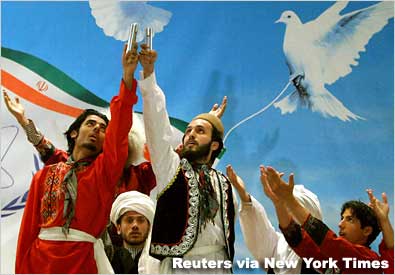 What does Kim Jong-Il want?

North Korea’s announcement about the possibility of a long-range missile test is rooted in five key reasons.

What the U.S. Should Do

The Bush administration’s playbook on North Korea has been very inconsistent and dictated more by political considerations than by strategic needs. That approach follows precedents set by this group of policymakers.

The Bush administration should also not be tempted to create a theoretically manageable skirmish to divert attention from problems plaguing it. U.S. troops in Okinawa cannot reach safety that fast.